Haunted Stories of the Hawthorne Hotel
in the City of Salem, Massachusetts 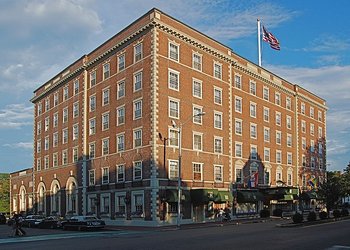 The Hawthorne Hotel, which was officially established in the year of 1925, stands with grand authority and splendor within the heart of the City of Salem, Massachusetts. The distinctive establishment is a well-respected member of the organization known as the Historic Hotels of America. Throughout its rich and immense history, in excess of 1 million people have lodged at the hotel. Known for its carefully crafted architecture, rich amenities, friendly and professional staff, and its Grand Ballroom, the Hawthorne Hotel has hosted many notable individuals, weddings, and numerous social events throughout the years. It is also said to host a vast array of spiritual beings and is considered to be the most intriguing haunted hotel in Salem. In this comprehensive guide, you will be introduced to the real haunted stories associated with this spectacular establishment.

In the year of 1923, Frank Poor, who was the founder of a lighting company had a vision of creating a modern type of hotel that would appeal to the average business traveler. Eventually, in excess of a half a million dollars was raised through stock sales to initiate construction on the hotel. In the year of 1924, construction started. The hard work and dedication of the construction crews paid off when, on July 23rd of the year of 1925, the structure was opened. The fanfare was immense. It consisted of a flag-raising ceremony, the presence of many influential groups of the time, as well as a parade within the city. It was named after the famous author of the city at the time, Nathaniel Hawthorne, whose best works include The House of Seven Gables and The Scarlett Letter.

Prior to the construction of the Hawthorne Hotel, the Salem Marine Society met at the location where the hotel would be built; however, a deal was struck between the group and those that wanted to build the hotel that they would be permitted to meet in a room situated at the top of the new hotel. The group had met in the area since the year 1830 but were more than happy to agree to the deal. They allowed their original meeting place to be torn down. The purpose and intent of the Salem Marine Society was to assist mariners and their family members. They were driven to optimize the navigation routes and the safety of those navigating into New England. The group is still active today and continues to meet in the room provided to them; however, this area of the structure is not accessible to the general public.

Throughout the years, this haunted hotel has hosted several notable individuals and events. In the 1960s, Miss Harriet James directed and led a highly distinguished dance school. Each year, celebrations of the school were held within the beautiful Grand Ballroom. In the year of 1970, the popular television series, Bewitched, filmed at the Hawthorne Hotel in the elevators.  An unsuccessful séance was performed in 1990 in an effort to summon the spirit of Harry Houdini. In 1991, the very first Halloween Party was held at the haunted hotel. Ten years later, the former President, Bill Clinton, visited the Hawthorne Hotel. In the year 2007, Ghost Hunters performed an investigation at the hotel. In the year of 2015, Robert de Niro and Jennifer Lawrence resided at the hotel while filming the movie, Joy. That same year, the hotel was given an Award of Excellence by the Historic Hotels of America.

According to past employees, those that have resided within the walls of the Hawthorne Hotel, and the City of Salem locals, a vast amount of paranormal activity is said to have occurred and is believed to still occur within the structure. Many of the haunted stories seem to surround the captains who were part of the Salem Marine Society prior to their deaths. One of the real ghost stories pertains to a large nautical ship wheel, which is located within the restaurant called “Nathaniel’s”. Many have claimed that the wheel seemingly moves on its own. When physically stopped, it resumes the movements. While a bit unusual and highly perplexing, this is one of simpler true paranormal stories that are said to occur within the Hawthorne Hotel.

The next of the most popular haunted stories pertains to the area that is commonly referred to as the “Lower Deck”. An employee, who was directly responsible for setting up and arranging the room, performed his duties one night and briefly left the room. Upon his return, he found that all of his work had been undone and the room was completely rearranged. This experience is said to have frightened the employee to the point where he requested to be removed from all night shifts, thereafter.

A haunted hotel story would not be complete without haunted stories surrounding certain rooms within the structure. In terms of the Hawthorne Hotel, these rooms included that of 325 and 612. The spiritual entities that are believed to haunt room 325 are suspected to be those of past guests. There have been reports of the lights turning on and off, with no explanation. The same holds true for the water faucets within the room. While lying on the bed, guest have reported experiencing an extreme level of cold. Many have reported feeling as if they have been touched while trying to sleep. Additionally, many have reported hearing a disembodied cry of a child that seems to be searching for its mother.

In room 612, the real ghost stories seem to surround the spirit of Bridget Bishop. This lady is notable as being the first person to be executed in the City of Salem during the witchcraft trials. This was done in the year of 1692. She was accused of bewitching five different females of the time. These included Elizabeth Hubbard, Abigail Williams, Mary Walcott, Ann Putnam, Jr., and Mercy Lewis. In room 612, many have observed a ghostly female apparition, believed to be that of Bishop. Additionally, the smell of apples is exceptionally strong in the room and throughout the structure. Many connect this to Bishop, as she owned an apple orchard in life. It is believed that the land where the Hawthorne Hotel sits was where that apple orchard was located.

When the TAPS team from Ghost Hunters investigated the Hawthorne Hotel to determine if the haunted stories held any validity, they were unable to obtain evidence. However, it was stated that pushing ghosts to act on cue is a difficult endeavor. Those that have experienced the unexplained phenomenon believe that, yes, true paranormal stories surround the structure. In fact, many have elected to not return to the establishment. The General Manager at the time of the show’s airing, Juli Lederhaus, concludes at the end of the show that “The mystery still remains”. The most current General Manager, Claire Kallelis, states: “… There is something about the Hawthorne Hotel that is unique.”

Get directions, view photos and read the visitor reviews and traveler tips for the Hawthorne Hotel!

Return to the Hawthorne Hotel Top of page

Return to Haunted Hotels in the Northeast Main Page

Have your say about what you just read! Leave me a comment in the box below.
Copyright ©, 2008-2018 haunted-places-to-go.com All Rights Reserved