Andersonville Prison is considered, by many, to be one of the most popular haunted places in Georgia. The Andersonville National Historic Site is the only National Park to serve as a unique memorial to all of the Americans that have served in the military and been held as a prisoner of war.

The prison site in Andersonville, the National Prisoner of War Museum, and the Andersonville National Cemetery are all part of the Andersonville National Historic Site. If you are interested in discovering haunted places to go, or prime locations for a paranormal investigation for American ghosts, it is quite likely that you are mostly interested in learning about Andersonville Prison, which was once referred to as “Camp Sumter”. This Georgia prison served as a camp or holding prison for Union soldiers that were captured and held as prisoners of war by the Confederates during the American Civil War. In reading this guide, you will learn of the history of this haunted prison, the events that took place that involved the prisoners of war that were held captive on the grounds, as well as information pertaining to the American ghosts that are said to continuously make themselves known to visitors today. 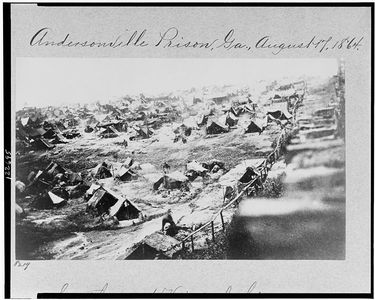 A Basic Introduction to the Civil War

Before the initiation of the American Civil War in the year of 1861, the northern states and the southern states located within the United States argued heavily over many issues for at least a couple of decades. The most controversial issues of the times included the authority of the states versus the federal-based authority, the expansions that were occurring to the west, as well as slavery. Finally, after heated debates, the conflicting opinions regarding these issues exploded into a war, immediately after Abraham Lincoln was elected as the president in the year of 1860 and seven different states from the south elected to secede from the Union to create what was referred to as the “Confederate States of America”. Immediately after the initiation of gun fire in the war, four more states seceded.

In order to understand the signs of paranormal activity associated with Andersonville Prison, it is essential that you understand the develop a solid understanding of the American Civil War and what occurred to those that fought in the war, and were directly affected by the war. This war continued for four long years, resulting in brutal fights and continued conflict. Numerous battles, such as Bull Run, Gettysburg, Vicksburg, and several others occurred during the American Civil War. It was not at all uncommon to find neighbors, friends, and even relatives battling against each other during this devastating period that started in 1861 and ended in the year of 1865, when the Confederate soldiers elected to surrender. Many point at this war as the costliest and the deadliest, with an average of 620,000 soldiers killed out of an estimation of approximately 2.4 million. In addition to this, millions of individuals – both in the military and of citizen status – were injured. It is said that the states that were part of the confederacy not only suffered extreme damage, but that the population was completely devastated.

The Purpose of Civil War Prisons

Now that you have a general understanding of the American Civil War, as a whole, it is now important that you gain an understanding of the purpose associated with the Civil War prisons that were created during this devastating American war. In the beginning stages of the war, neither the north nor the south sides expected the battle to last for a long period of time; however, both sides were quick to capture prisoners of war. In most situations, those captured were released on the condition that they take an oath to discontinue battling. Once they were released, they were placed into camps and labeled, “Noncombatants”. Throughout the war, both sides quickly obtained many thousands of individuals as prisoners of the war; however, the exchange system of the time lasted a little under a year.

In the southern states, most of the Union soldiers that were taken were placed in barns, and many old warehouses. As more and more soldiers from the Union were captured, the south started constructing camps that would act as prisons. In most cases, the areas were stockades that were wooden and enclosed large fields. This is how Andersonville Prison came into existence in Andersonville, Georgia. Those that were placed at this Georgia prison would find themselves suffering from numerous hardships due to the extremes amount of people that were placed within the camp. Examples of these hardships included the complications of overcrowding, lack of proper sanitation, and inadequate water and food amounts. It has been estimated that 30,000 Union soldiers died while in prison camps, and 26,000 Confederate soldiers died while being held at Civil War prison camps.

The military-based prison facility that is commonly referred to as Andersonville Prison was officially dubbed, “Camp Sumter”. It was provided this name due to the fact that it was located in Sumter County, Georgia. The Confederate soldiers had reached an agreement that the Union soldier prisoners of war should be placed in an area that had a high level of security. Due to this decision, construction on Andersonville Prison started in the early parts of the year of 1864. In the beginning, the prison consisted of just over 16 acres and was enclosed by a very high wooden stockade wall. In the year of 1864, the prison was expanded to consist of over 26 acres due to the fact that it was overpopulated. The wooden stockade was built to resemble the shape of a parallelogram and measured 1,620 feet in length and 779 feet in width. Inside, there was about 19 feet of area that was referred to as, the “Deadline”. If any of the prisoners of Andersonville Prison crossed into this region, the guards had full authority to shoot.

According to information derived from the Andersonville National Historic Site, the very first prisoners to be placed at this Georgia prison arrived towards the end of February in the year of 1864. Each day thereafter, hundreds of prisoners arrived at the prison. Given the fact that the area was only designed for 10,000, by June of the same year, the prison housed over 16,000 more prisoners than was considered ideal for the stockade, bringing the total up to 26,000 Union prisoners of war. In the month of August that year, a total of 33,000 Union soldiers were at this prison. The prisoners were not housed, fed, or clothed properly. In addition to this, medical care was scarce. Due to the troubling conditions, the harsh environment, the physical anguish and the mental anguish suffered by the prisoners of war at Andersonville Prison, it is absolutely no wonder that this is considered to be one of the most haunted places in Georgia. In fact, it may hold more American ghosts than any other haunted prison throughout the United States.

The Living Conditions at Andersonville Prison

In order to appropriately understand the devastation and despair that is often felt by visitors to the area of the Andersonville Prison, as well as that which is often reflected in the paranormal events of the area, it is important to gain a bit of understanding surrounding the living conditions of this military prison. It was an immense land space that was open. Barricades surrounded the area that would ensure that prisoners would not escape the destiny that they had come to know. A man by the name of “Henry Wirz” was named the Captain of the military prison, and was known as an abusive, cold-hearted individual that the prisoners came to hate. Surrounding the prison grounds, he established what he often referred to as the “Dead Line”. Prisoners were warned to stay away, for if they came too close to this area, their lives would immediately be halted due to gunshot.

There were several individuals that were given a position of command at Camp Sumter. These were referred to as “Raiders”. Surprisingly, these individuals were not Confederate based officers; they were actually prisoners at the facility. However, they were permitted to bring about a line of destruction by the individuals that were in command at this prison. They would go around the prison at random and physically torture the individuals stationed there due to the local criminal justice system through severe beatings, taking their food and clothing, and in many cases, they outright murdered the other prisoners. Eventually the other prisoners took control of the situation with the Raiders and they were either hung or killed. Today, it is believed that the Raiders are back in the spiritual form, seeking revenge on those that took their lives. In reviewing the information surrounding the prison through the Andersonville National Historic Site, it is easy to understand why this is dubbed one of the most haunted places in Georgia.

Several sicknesses rapidly spread among the prisoners that were held captive at Andersonville Prison. These sicknesses were a direct result of unsanitary conditions, dehydration, malnutrition, physical abuse, insects, and lack of hygiene. It was not at all unusual to discover captives with yellow fever, gastrointestinal complications, smallpox, and even scurvy. As a matter of fact, it was more common to stumble upon sick prisoners than healthy ones. There was little to no shade at the prison. Many men would dig holes just to experience a small amount of relief from the immense heat. While small tents and small huts were created for shelter, this did very little for protection from the elements. Several men died naturally, others did as a result of abuse and murder…it is believed that several thousand spirits still remain.

The American ghosts that are said to linger at the site of this Georgia prison seem to be reliving the torment and despair that they experienced in life. In the evening and night time hours, it is not at all unusual to hear echoes of guns firing. Many find that they feel extremely degrees of fear and mental devastation. Visitors have reported hearing loud cries, faint whispers and whimpers, and yelling while exploring this part of the Andersonville National Historic Site. Many individuals express experiencing a smell that is foul and breathtaking. In addition to this, distinct figures have been noted walking in the fog that cascades upon the grounds of the haunted Georgia prison site. If you have an interest in history and want to experience the signs of paranormal activity that so many others have experienced, you should take a tour of the Andersonville Prison. In doing so, you, too, will likely agree that this is one of the most haunted places in Georgia.

Have your say about what you just read! Leave me a comment in the box below.
Copyright ©, 2008-2018 haunted-places-to-go.com All Rights Reserved