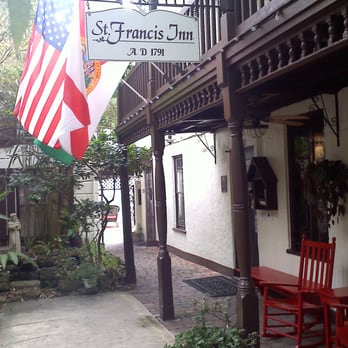 The St. Francis Inn in St. Augustine, Florida is an old, ancient-looking inn with a lot of brush. Its appearance gives one the feeling that it was there during the plantation age. The area is very hot, but on our stay, we had plenty of shade. We learned quite a bit from the staff on our visit. There is a room on the third floor that is called “Lily’s Room”. We learned that Lily was a servant that fell in love with a captain’s nephew. He was Caucasian, but, despite that, they had an avid love affair.

When the uncle discovered the affair between his nephew and the servant, he forbad him to see her. The nephew was devastated. So much, in fact, that he went to the attic and hung himself. Naturally, Lily was said to be absolutely devastated because the love of her life was dead. Not too much was documented of her life afterwards, but, we can only guess how absolutely heartbroken she was following the death of her love.

The staff at the St. Francis Inn confirmed the fact that there have been many ghostly sightings. Her room was investigated by A&E and confirmed to be haunted. I watched the report on television. It was very spooky. When we stayed at the St. Francis Inn, it seemed that a couple of things in our room were moved. We went out of our room and came back in to find that a pair of pants we had lying on the bed were on the floor. Additionally, a belt we had out moved. It was only slightly, but it was moved. Upon talking with the staff, we got the eerie feeling that something was there, a presence….

While the City of St. Augustine and the St. Francis Inn were really cool, I did not sleep much. I was scared, but at the same time, I wish I would have experienced more of the paranormal activity and unexplained phenomenon that is said to occur at the St. Francis Inn. I will revisit St. Augustine again and will stay at the inn. Maybe then, Lily will show herself. This was a great experience!

Join in and write your own page! It's easy to do. How? Simply click here to return to Haunted Hotels in the South.